A Letter to President Ryan on Jefferson’s Legacy

Lee Habeeb, Law School class of ’91, has given The Jefferson Council permission to republish his letter, first appearing in Newsweek, that we referenced in an earlier TJC post. — JAB

I’m a graduate of the University of Virginia School of Law, where I spent two of my three years studying the Constitution, property rights, contract law and federalism with you in Charlottesville. We studied important things that our Founding Fathers thought about and debated in the 18th century and that we’re still debating today.

I’ve been reading with great worry about efforts by students and faculty alike to remove the statue of Thomas Jefferson that stands in front of the Rotunda and remove all positive references in official university communications about the man who founded our beloved university. To your credit, you defended Jefferson’s presence. “I do not believe the statue should be removed, nor would I ever approve such an effort,” you wrote in UVa Today not long ago. “As long as I am president, the University of Virginia will not walk away from Thomas Jefferson.” It was a clear statement, but you didn’t go far enough.

Jefferson, to put it plainly, was one of the greatest political visionaries in human history. No less a visionary than Reverend Martin Luther King—himself a flawed man worthy of honor—thought that was true. “Never before in the history of the world has a sociopolitical document expressed in such profound, eloquent and unequivocal language the dignity and the worth of human personality,” King declared on the Fourth of July in 1965 while speaking about the Declaration of Independence. “The American dream reminds us—and we should think about it anew on this Independence Day—that every man is an heir of the legacy of dignity and worth.”

We are all heirs of the work Jefferson and our founders did in the 18th century. But like any inheritance, it’s easy to squander. END_OF_DOCUMENT_TOKEN_TO_BE_REPLACED

One of the four core pillars of The Jefferson Council is to “preserve the Jefferson Legacy.” This legacy has been under assault continuously since the events of August 2017, events which had absolutely nothing to do with the University, much less Thomas Jefferson. Student leaders on the Student Council and Cavalier Daily have relentlessly conflated the assault on the Lawn by out-of-town racists with the University and Mr. Jefferson. Now in the editorial above, they are clearly calling for the total eradication of Thomas Jefferson from the history of the University he founded. END_OF_DOCUMENT_TOKEN_TO_BE_REPLACED

Because of our not telling the story of the burial of slaves outside of cemetery walls all over the world, we must stop educating students about the past accomplishments of those buried within the walls! This is flagrant wokeism and cancel culture which must be CRUSHED. END_OF_DOCUMENT_TOKEN_TO_BE_REPLACED

We had an introductory full page ad in the last edition of the Magazine: END_OF_DOCUMENT_TOKEN_TO_BE_REPLACED

The most blatant example of activity at UVA initiated by politically motivated faculty, especially in the history department and in the alumni magazine, is the lie that says Jefferson fathered Sally Heming’s children. After months of study, it is clear to me that this lie is bogus and is repeated purely to prove how slaves were mistreated. Promulgation of this lie has blackened Jefferson’s reputation and has led to calls to “cancel” his memory.

I have watched The Jefferson Council attack not very significant happenings at the University from people with the same kind of motivations while ignoring the biggest travesty of all. You seem to be pursuing capillaries while ignoring the hemorrhaging of the  main artery. END_OF_DOCUMENT_TOKEN_TO_BE_REPLACED 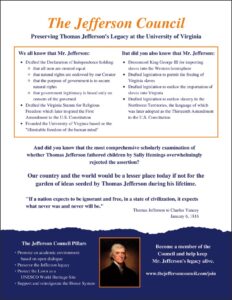 This striking affront to our freedom of expression is particularly meaningful to me, as I just returned from a three day trip to Philadelphia with my Canadian born and raised wife to visit the foundations of our great and unique republic–the existence of which is so much attributable to our founder Mr. Jefferson. Without his efforts, it is doubtful that our country would exist in the form that it does today–and I realize that there is a good chance I would not be here presently, my ancestors probably having been eliminated by the forces of the Tsar, Hitler or Stalin. END_OF_DOCUMENT_TOKEN_TO_BE_REPLACED 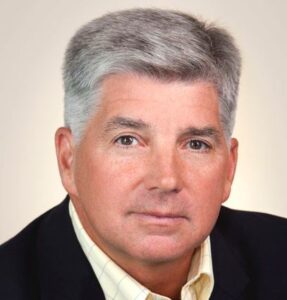 Written by Bert Ellis, President of The Jefferson Council

I am writing to you in your capacity as Chairman of the Board of Trustees of the  Jefferson-Madison Regional Library, with a request that you postpone the vote  scheduled for June 27 on changing the library’s name until everyone involved in the decision has an opportunity to carefully consider all of the ramifications of this landmark decision.

We are aware of no urgency in resolving this issue and no harm of any kind that might  result from a reasonable delay. On the other hand, a rush to judgment without regard to  fundamental facts could produce long-term harm to both the institution you represent  and the reputations of all involved.

Given the many very positive contributions of Presidents Jefferson and Madison it  would seem only fair that they be given at least a modicum of due process before being  discarded from our community in such a cavalier manner.

I write in my capacity both as President of the Jefferson Council (a non-profit  organization formed to preserve the legacy of Mr. Jefferson), and as a 1975 graduate of  the College and a 1979 graduate of the Darden School of Business. Our Board of  Directors at The Jefferson Council has unanimously instructed me to contact you in this  matter, as we consider your planned vote to be of profound importance.

Your role with the Library Board of Trustees suggests a love for books, education, and of  course the libraries that facilitate public access to books. I am confident that you are  familiar with Mr. Jefferson’s famous observation that “If a nation expects to be ignorant  and free, in a state of civilization, it expects what never was and never will be.”1 Thus,  the library branches under your supervision play a critically important role in maintaining our democracy and preserving our freedoms.  END_OF_DOCUMENT_TOKEN_TO_BE_REPLACED

In Defense of an Inviolable Honor Code

Dishonesty is the root cause of all human evil. The Honor System at the University Of Virginia attempts to get to the very heart of our problem. Honor is your adherence to the truth.

Jefferson honored the phrase, “The Truth Will Make You Free.” Jefferson could see that if all people were honest, there would be no cheating, no crime, no war. Personal honor — honesty — is the foundation of civilization.

The Editorial Board of The Cavalier Daily has taken a dishonorable, unenlightened, and untenable position. The March 17th op-ed stating that students at The University are incapable of listening to a speaker and that speech threatens their very “lives” reveals a childish and churlish attitude that is in opposition to the values of The University, the values of civil society, and the values of America. Jonathon Haidt correctly noted that this generation has minds that have been “coddled” so much that they lack understanding of basic principles and are guided by many “untruths.” This article has the hallmarks of all of those untruths, starting with the headline. END_OF_DOCUMENT_TOKEN_TO_BE_REPLACED

No Need for Archivists to Fight White Supremacy!

Nancy Miller is a University of Virginia alumna, class of 1975.

I recently became aware of your organization, and I wanted to send a letter of thanks to the Jefferson Council for covering events in the University Library (“How Not to Create a Diverse, Welcoming Workplace”, September 27, 2021; and “No Woke-ism to See Here, Move Along Now”, March 9, 2022). I am a retired professional librarian and archivist (with 16 years of experience as an archivist in Philadelphia, including ten years at the University of Pennsylvania Archives from 2004-2014). I am also an alumna of the University of Virginia (BA 1975), and I have a keen interest in ensuring the future success of the Library. END_OF_DOCUMENT_TOKEN_TO_BE_REPLACED